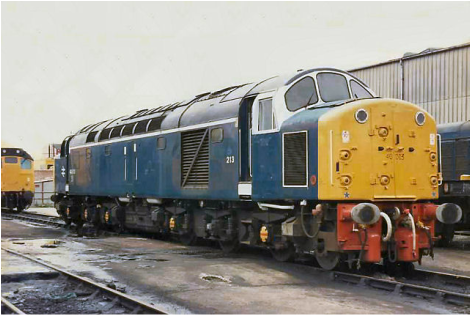 The locomotive was Built at English Electric Vulcan Foundry Works, Newton-Le-Willows, during the early part of 1959. She was released from Vulcan Works in early May of that year and travelled to Doncaster Works for a serious of acceptance trails before entering service with BR on the 6th June 1959. Numbered D213, the locomotive was allocated from new to 1A Willesden Shed, however later that same month she was transferred north to 12B Carlisle Upperby on loan and later permanently from September 1959. Eleven months later in August 1960 she was on the move again, this time to 1B Camden where she remained until November 1961, when she was allocated to 5A Crewe North Shed.
In June 1962, D213 was named ' Andania ' the nameplates being fitted at Crewe Works during routine maintenance. April 1966 saw the loco allocated to the London Midland Western Lines where she remained until August 1967, when she was allocated to 9A Longsight. June 1968 saw the locomotive re-allocated again, this time to D09 Manchester Division. In July 1971 the loco was out shopped from Crewe Locomotive Works after a major overhaul which included air braking, in BR blue livery and now carrying the number 213. June 1972 saw the loco re-allocated to D10 Preston Division, where she remained until May 1973 before moving North to Carlisle Kingmoor depot.

Throughout the locomotives career, Andania was one of the distinguished few Class 40's which hauled the Royal Train. Crewe depot always turned out a pair of immaculate Class 40's for these diagrams which is something which we hope to recreate at the Midland Railway Centre in the future.

During August 1973 the loco was once again on the move, this time it was back to Longsight depot in Manchester. March 1974 saw 213 renumbered to 40013 under the new BR TOPS system, although by then the name Andania had long since been removed. The loco was also one of the last group of Class 40's to receive a works classified overhaul, which took place during the middle of 1980 at Crew Locomotive Works and by October of that year the loco was re-allocated to Wigan Springs Branch depot. On 3rd May 1982, 40013 hauled ' The Whistler 1 ' Railtour from London Finsbury Park to the Nene Valley Railway, returning to London Kings Cross station later that evening. The following month saw 40013 on another special working when she hauled a Shrewsbury-Mary port excursion (40192 worked the outward leg). On 23rd September 1982 the loco was sent to Stratford depot in London for a complete bogie swap and was back in traffic by the 28th of the month. 3rd October 1982, saw the loco re-allocated back to Crewe Diesel Depot, the last time Andania was allocated to this depot was over twenty years ago during the steam era. Further special duties followed during 1984, when the loco hauled the ' Cumbrian Whistler ' Railtour. May 1984 saw 40013 re-allocated back to Longsight depot for the last time, has the loco was officially withdrawn from traffic on the 18th October 1984 at Wigan Springs Branch depot.

However, due to the shortage of motive power, the loco was reinstated to traffic on the 30th October of that year but this was only short lived and on the 4th January 1985 the loco arrived at Crewe Diesel Depot at 00:05 and was reported on TOPS as out of service with no expect ok date. Unfortunately, several days later on 11th January, 40013 were officially withdrawn from traffic at Crewe Diesel depot at 14:30 hours, the reason given was power unit problems.

Shortly after withdrawal, 40013 moved from Crewe to Bescot depot in a surprise move to replace 40063 as the LMR exhibition loco. The staff at Bescot cleaned the loco up and white washed the inside of the windows for some reason. On the 20th March 1985 the loco was towed by 31198 from Bescot to Redditch, together with a cinema coach and brake van to promote the line between Birmingham New Street station and Redditch. In connection with this, Mid-line held a mini open day at Redditch station on Saturday 30th March with guest appearances of D200 and 58020. On the 15th April 40013 was back at Bescot prior to moving onto Shrewsbury for another exhibition on the 2nd May. Following the exhibition at Shrewsbury, the loco moved onto Blackburn behind 25048 and it was while the loco was here that a group of Class 40 enthusiasts painted the white window frames on the loco in true (Deltic style). By early September the loco had moved to Wigan Springs Branch depot, en-route to Southport later that month behind 25035. After its appearance at Southport, the loco headed back to Bescot behind 20075/132 as far as Warrington and forward to Bescot Yard behind 85014. Next it was the turn of Leamington Spa, where the loco remained until 29th October before moving to Tyseley depot behind 45062. A change of plan now meant that Tyseley depot was to become responsible for the loco and they wasted no time in sprucing up Andania. Out came the BR blue paint but with old style yellow warning panels and carrying both 213 and 40013 numbers. To date no Class 40's had ever carried this style of livery in service, the depot staff also made two wooden nameplates for the loco, although the name was spelt incorrectly.

After its full repaint the loco was off to the SVR at Kidderminster, then onto Stourbridge Junction and finally Worcester promoting the Birmingham-Worcester line. The loco then returned back to Tyseley for a short time before moving onto Aberystwyth. On its return to Tyseley depot the loco was given another full re-paint only this time around she was painted into BR standard blue livery, with full yellow ends, red buffer beams, yellow axel box covers and numbered 213. The locos next appointment was at Rugby station when she was on show in one of the bay platforms in connection with the Rugby open day, after the event the loco once again returned back to base. September 28th saw 45022 drag 40013 off to Wrexham to take part in a rail event held at the station, the loco later returned back to Tyseley behind 47019 on the 13th October. During 1987, the loco once again visited Shrewsbury to take part in their June rail event, returning back to Tyseley behind 37427 on the 30th July. Later in the year on 23rd September, 40122 dragged 40013, 27059 and D9000 from Tyseley to Basingstoke for the open day which was held over the weekend of the 26th & 27th of the month. The convoy returned back to Tyseley depot two days later in readiness for the depots own open day which took place on Sunday 4th October and amongst the exhibits on show was three Class 40's namely, 40013, 40122 and 97406 (ex-40135).

The Crewe Station remodelling program saw a small number of Class 40's reinstated to the departmental sector and although at the time 40013 was rumoured to be one of these locos the move never took place. Instead the loco was dragged into the shed at Tyseley on 2nd February 1988 and examined with the view to swapping its wheelsets with those underneath 40122. The following day 40013 was dragged off towards Crewe Diesel depot by 47497 as the donor loco for 40122. The wheelsets where exchanged between both locos and 40013 now sitting on scrap wheelsets was removed to Crewe Basford Hall Yard together with sister loco 97408 (ex-40118). On the 10th May 47348 dragged both locos to Humberstone Road, Leicester and the following day they were both tripped into Vic Berry's Yard.

During May 1988 the tender forms where sent out for 40013 and the loco was successfully purchased by Mr. Trevor Dean. After the asbestos removal had taken place the loco was moved onto Leicester depot, then forward to Tinsley Yard on the Toton-Doncaster Speedlink Service. From here 40013 was moved to Sheffield Freight Yard and then loaded onto one of G.W.S Johnsons, low loader vehicles for the final journey to its new home at the South Yorkshire Railway Museum, Meadow Hall Sheffield.

Since the loco arrived at its new home in 1989, the loco has been one of the museum's main attractions especially during open day events. However unfortunately very little work was undertaken on restoring the loco during its time spent their which is now getting on for ten years. The Class 40 Appeal has always taken a keen interest in 40013 especially as it’s a named Class 40, we have always kept in touch with its owner to see if we could offer any sort of help with regards to restoring the loco. After several years of talking with Trevor Dean, we finally agreed on a package to restore the loco which suited both parties. However in order for us to restore 40013 the loco would need to move to the Midland Railway Centre, home for the group since 1988 and a golden opportunity to eventually run two Class 40's in identical livery and consecutive numbers. The next hurdle to get over was seeking permission from the MRC Board to bring the loco to the centre, which was finally agreed upon in May 1999.

On Monday 13th September, 40013 finally left Meadow Hall, Sheffield, home for the last ten years and headed south towards the MRC. The haulage contractor was Allely's heavy haulage, which we felt was the best in the business, they turned up at Meadow Hall just after lunch with two lorries, the first to transport the loco and the second to transport the ramps. The loco was soon loaded onto the lorry and ready to move by 19:00 hours with a police escort. 40013 bid farewell to its home for the last ten years and headed towards the M1 Motorway via the ring road for the short journey to Junction 28. Here the convoy turned off and headed down the A38 towards Ripley and finally Butterley Station, which was reached around 22:00 hours that evening. The next day 40013 was off loaded at Butterley Engineering Works without any problems and dragged down the short section of track to Swanwick shed by D8001. Once on site the MRC staff wasted no time in shunting the two Class 40's side by side for a photographic. This was the first time these two machines had been together since the asbestos removal in Vic Berry's Yard back in 1988. The following weekend saw the MRC hold its autumn diesel gala, with 40013 on show for the weekend.

Since the loco arrived on site, already hundreds of man hours have been spent on restoring the loco back to her former glory.

On Sunday evening around 19:00 hours, 40013 was successfully fired up for the first time in preservation. However, the locomotive suffered a mechanical failure and was shut down within ten minutes of running.

On Monday 13th January 2003, Andania left the Midland Railway Centre by road transport and headed for her new home at Barrow Hill Roundhouse were the restoration work on the locomotive will continue.

The loco as now been returned to its former glory at Barrow Hill Roundhouse and  carries  green livery with full yellow ends and numbered D213.

Work carried out on the loco so far is a complete bogie strip down and overhaul with all six traction motors being sent away for a complete refurbishment and overhaul.  All the brake cylinders and springs have also been overhauled together with both compressors.

The radiators have also been removed and sent away for overhaul together with the main generator. All the air tanks have been removed and recertified for another ten years the list is just endless.
​
After all the hard work and determination to succeed by the Barrow Hill fitters, the final goal as to be main line running. 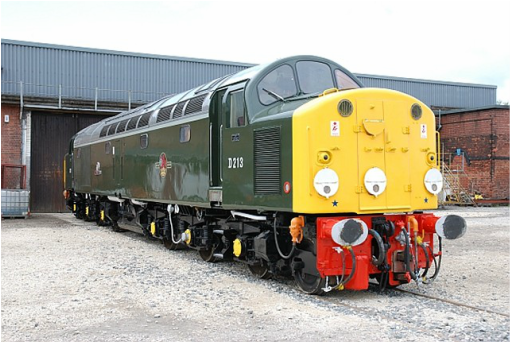