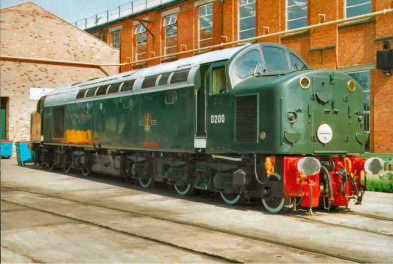 200 was built by the now famous English Electric Company at their Vulcan Foundry Works, Newton-Le-Willows, Lancs and entered service in the Great Eastern Region in March 1958, allocated to Stratford Shed. On the 18th March she worked a special demonstration train from London Liverpool Street Station to Norwich and back, carrying a large headboard proclaiming the “First 2,000hp Diesel London Norwich. Progress by Great Eastern".

The locomotives first working was ' The Hadrian Pullman ' from London Kings Cross to Carlisle, via Leeds and the Settle and Carlisle route on Sunday 31st July 1983. From then onwards the loco became an instant success on Railtour, special charters and event appearances at BR open days.

The first signs of trouble occurred on 20th November 1983, when the power unit threw two con rods through the crankcase. The locomotive was later sent back to Toton depot, arriving on 2nd December to undergo a power unit swap with donor loco 40170 and was back in traffic a week later.

Although D200 was roistered to work on the S & C route, the loco could be found on all types of workings in various parts of the country, from heavy Freightliner traffic to Newspaper trains and even engineering diagrams, besides special duties and rail tours. In fact ever since the loco was reinstated back to traffic she seems to have covered every corner of the country and travelled thousands of miles.

In January 1988, the loco visited Allerton depot for tyre turning, the work completed the loco moved to Crewe Diesel depot and upon arrival at the depot an inspection was carried out which revealed that the tyres had unfortunately been turned to an incorrect profile and were now all below scrap size. To overcome the problem Crewe carried out a wheel set swap with 40013 being the donor loco. After the work was carried out, the loco moved to Stratford depot in London for a complete repaint prior to working its last farewell railtour. Regrettably the loco was not completed in time to work the ' Pennine Farewell ' tour on 12th March and was released from Stratford depot in light grey undercoat, with small yellow warning panels. After the Railtour the loco returned to Stratford to complete its repaint.

16th April 1988 was the official last day of D200 in traffic on BR, ending thirty years of loyal service with the loco. An immaculate D200 left Stratford depot for the last time and travelled light engine towards Liverpool Street Station, to work the final Class 40 hauled train in BR service. The headboard carried was identical to that carried by the locomotive some thirty years earlier, only now it read ' Last 2,000hp Diesel London - Norwich Progress by Inter-City '. The final tour departed from Liverpool Street Station and headed for Norwich; from here it was onto York via Peterborough and Doncaster. D200 arrived at York Station on time at 16:30 hours. After posing for a few minutes allowing people the last chance to photograph her before she disappeared light engine towards the National Railway Museum. On arrival at the Museum she was officially handed over to the National Collection by Mr. David Ward from Inter-City Charter Unit. D200 was officially withdrawn from service at 15:10 on April 18th 1988; this date was specially chosen as it was exactly thirty years to the day since the loco made its inaugural run, from Liverpool Street to Norwich.

During the early part of 1993, arrangements were made between the NRM and the North Yorkshire Moors Railway to allow D200 to operate over the line on two separate occasions. The first appearance was on Saturday 25th April when the loco hauled a small demonstration freight train over the line. Two weeks later on Saturday 8th May, she worked her first passenger train over the line since the locomotive became preserved The next public appearance at a preserved railway was in July 1997, when the loco visited the East Lancs Railway. The loco was on loan to the railway for a year and was looked after during her stay by the Class 40 Preservation Society. Apart from running the loco during her twelve months stay, the CFPS carried out a number of jobs on the loco, one being the removal of the power unit and main generator for repairs. Since then the loco has returned to the railway again and as also appeared at various open days including Toton, Old Oak Common and Crewe Works.
​
Although part of the National Collection, D200 is currently based at the North Yorkshire Moors Railway.
Depot Allocation

On 18th April 1988 at 15:10 hours and now a part of the National Collection and based at the National Railway Museum, York.
Current Identification

All over Dark Brunswick Green and numbered D200. 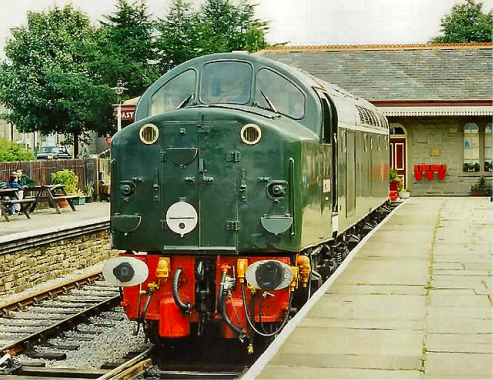 D200 at Rawtenstall during the ELR diesel gala on 14th July 2001.
​
Photo by Martin Ramsdale.
Powered by