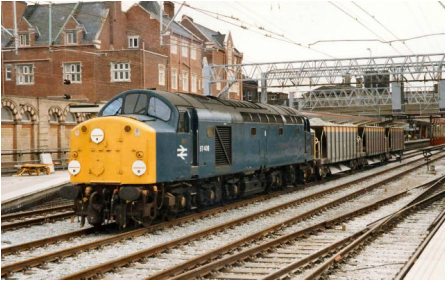 Built at Robert Stephenson & Hawthorn works, Darlington, the loco was delivered new to BR on 25th February 1961 allocated to Crewe North Shed (5A).

The locomotive also came to fame on the big screen, when she appeared in the TV film called “Robbery “based on the Great Train Robbery from the early 1960's, (the real locomotive being D326 alas 40126 of cause).

During January 1985, the loco moved to Tyseley TMD in Birmingham for tyre turning and rail tour duties along with 40012 Aureol and D200/40122. However while the loco was at Tyseley depot, it was discovered that all the tyres were far too thin to permit a further turning so the locomotive was placed into store instead and later withdrawn from BR operating stock on 13th February 1985.

Owing to the Crewe Station remodelling program, several Class 40's were re-instated to traffic including 40118, which was moved from Tyseley to Crewe depot on 27th April 1985 and officially re-instated to traffic on May 20th and allocated to Crewe Diesel depot. The locomotive was also given a new departmental number of 97408 and restricted to a maximum speed of 35 mph.

On the 4th September 1985, the loco was finally withdrawn from traffic at Wigan Springs Branch depot, the reason given was a defective wheel set and traction motor. However, due to the shortage of motive power, 97408 was once again re-instated to traffic on 6th November 1985 at Wigan depot, but was now running with two traction motors isolated.

The end of the line for 97408 (40118) finally came on 26th February 1986, when she was finally withdrawn from traffic at Crewe Diesel depot, after suffering power unit problems (defective camshaft). She was later dragged to Crewe Gresty Lane sidings for scrap.

With celebrity D200 now being the only class 40 in operating stock, Carlisle Kingmoor were looking for a supply of class 40 spares to keep her running, so plans were made to send both 97407 and 97408 up to Carlisle which took place on the 1st September 1986.

On the 2nd February 1988, 97408 was dragged from Carlisle depot to Crewe by 31235 for a possible wheel set swap with D200, which had recently had its wheels turned , but were now below scrap size. On arrival at Crewe the loco was inspected but the wheel sets were found to be in a poor condition so the loco was towed to Crewe Basford Hall Yard, and Crewe looked at using 40013 for the wheel set swap instead.
With the eventual aims of selling the loco to preservation, 97408 along with sister loco 40013 was moved from Crewe Basford Hall Yard to Humberstone Road Leicester on the 10th May 1988 for asbestos removal and dragged into Vic Berry's Yard the following day. The locomotive was eventually placed on the tender list for sale and was purchased by the D318 Limited.

After the asbestos removal at Vic Berry's Yard Leicester, the loco headed for the Birmingham Railway Museum, at Tyseley arriving their during early November 1988.
​
Since the loco arrived at its new home, a great deal of work has been undertaken. Number two bogie was removed and as received a complete overhaul, including a wheel set swap with replacement wheels coming off ex-40088. The traction motors have all been sent away for overhaul with one of them receiving a replacement armature from 50043 Eagle. The power unit also suffered frost damage the same as 40012 and repairs have now been carried out. Number two cab as received a great deal of attention and is now almost like brand new. To date, number two bogie has been overhauled and re-fitted under the loco and number one bogie removed and replaced with a spare bogie which is on loan to the group from the Class 40 Appeal. The standard of workmanship on restoring 40118 back to full running order is very high, with the groups is not ruling out the possibility of main line running in the future should the opportunity arise. 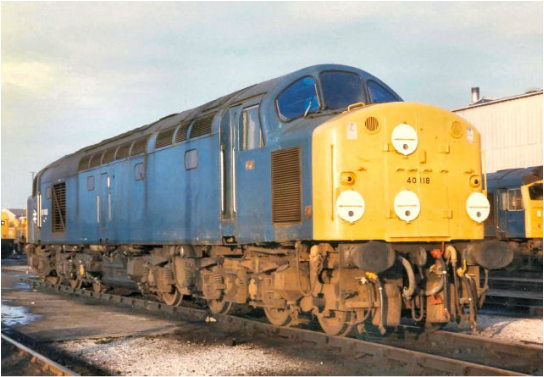 97408 Stands at Wigan Springs Branch depot between duties on 16:12:85. Photo taken by Paul Hill.
Powered by